Alton Mayor Brant Walker on Thursday released the following statement in response to statements made by outgoing Third Ward Alderman Michael Velloff that Walker says were clearly meant to distort Walker’s position on the proposed Sunnybrook housing development and divert attention away from David Goins’ strong support for that taxpayer-subsidized project:

“In a perfect example of the silly season of politics, Alderman Michael Velloff is distorting the facts related to my longstanding opposition to the proposed Sunnybrook housing development. Alderman Velloff’s desperate tactics are solely meant to divert attention away from David Goins’ strong support for the Sunnybrook project and the fact that Goins’ top donors are partners in the project.

I have been consistent in my stance on Sunnybrook, going back to an op-ed that I wrote and released in June of 2018. That op-ed, published in our local media, read as follows:

Contrary to recent media reports, I do not support the proposed Community of Sunnybrook development in its current form for the following reasons.

When the project was first brought to my attention by representatives of EBJJ, Inc. nearly two years ago, it did not align with my administration’s policy of promoting affordable single-family home ownership. Instead, the proposal included subsidized, multi-family rental housing.

Following discussions between myself, city staff, and representatives of EBJJ, Inc. to address my concerns with the original proposal for this project, I signed a Memorandum of Understanding (MOU) with EBJJ, Inc. in support of the project. That MOU included a stipulation that prospective residents of the project would have the opportunity to purchase their residence after 15 years, and it deleted all reference to subsidized housing within the project. Based on this MOU, I sent a letter of support for the project to the Illinois Housing Development Authority (IHDA) on behalf of EBJJ, Inc.’s pursuance of low income housing tax credits.

Low income as defined by IHDA regulations are people earning between $12.00 and $20.00 per hour.

In May of this year, it was brought to my attention that the application to IHDA for tax credits for this project included a proposal for various levels of subsidized housing within the development. A copy of that application was never provided to the City of Alton and had to be obtained by city staff from IDHA through the Freedom of Information Act.

At that time, I called the Executive Director of IHDA and withdrew my support for the project because the information contained in the developers’ application for low income tax credits did not align with the principles that were laid out in the MOU previously agreed to.

It has been, and will continue to be, my stated policy goal to promote the development of single-family homeownership over subsidized, multi-family rental housing. Alton is nearly 50% rental property and there is adequate affordable rental housing available. My administration, and the City Council, recently enacted a landlord licensing policy to ensure that rental property in our city is safe and does not diminish the property values of existing single-family homeowners.

Because the latest version of the proposal to develop the Community of Sunnybrook includes subsidized, multi-family rental units at the expense of single-family homeownership, I cannot support it at this time.

As anyone who is not blinded by personal and political animosity can see, nearly three years ago I explained the MOU that Mr. Velloff is attempting to distort, and why I ultimately could not support the proposed Sunnybrook project. My opposition to the Sunnybrook project stems from its failure to include homeownership provisions and its reliance on more subsidized housing for Alton.

I believe everyone should follow the same set of rules, put in place by our City Council, and that no special interest should receive special treatment. I can only assume that Alderman Velloff takes the opposite view given his statements regarding Sunnybrook’s lawsuit. It is not only proper, but in fact, necessary, to enforce our building and zoning codes equally to protect our property values.

Ultimately, Mr. Velloff’s statements are nothing more than a desperate attempt to divert attention away from his mayoral candidate’s support for more taxpayer subsidized housing for Alton.

Facts are stubborn things, and passions often get in their way during a campaign. In the end, the facts are simple: 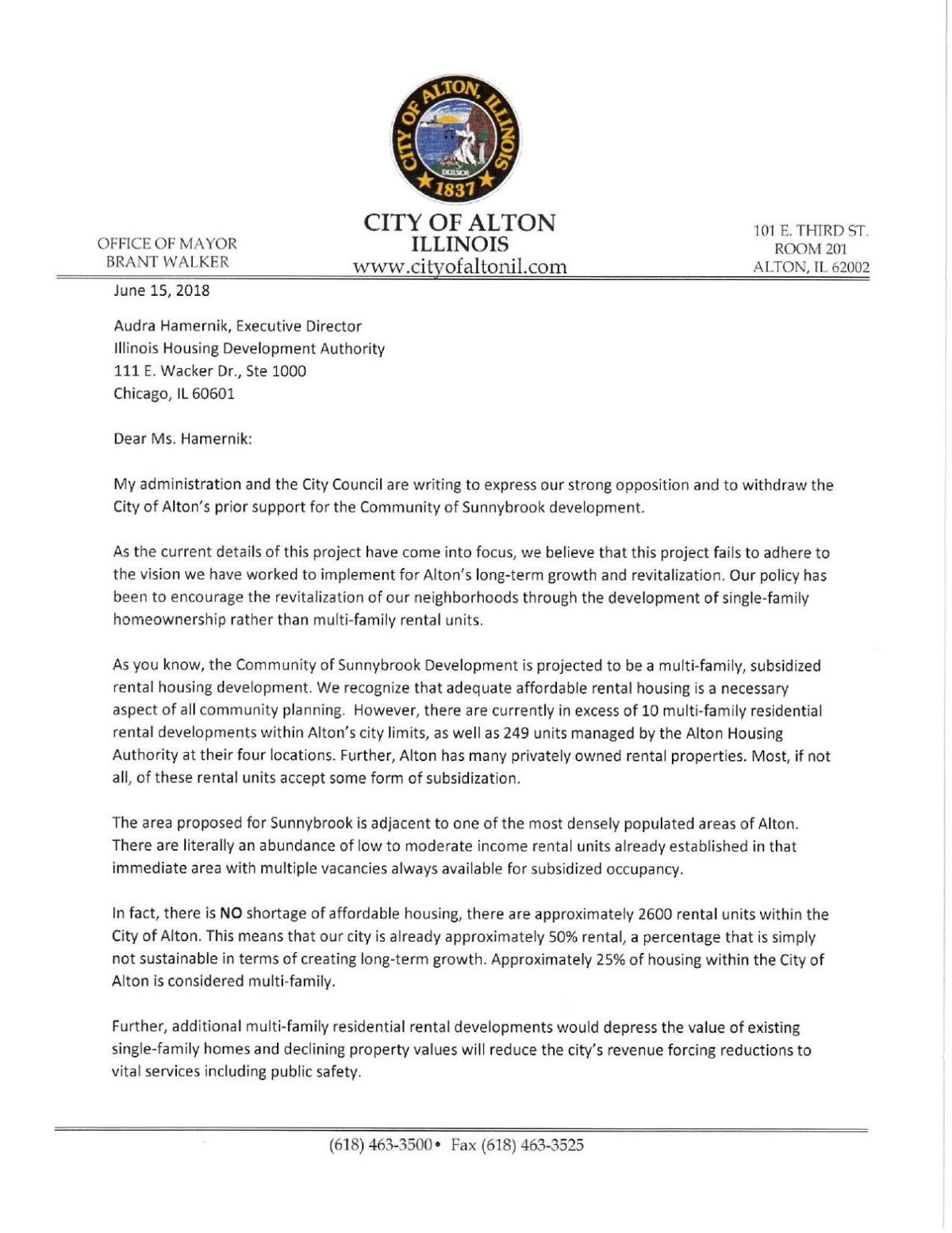